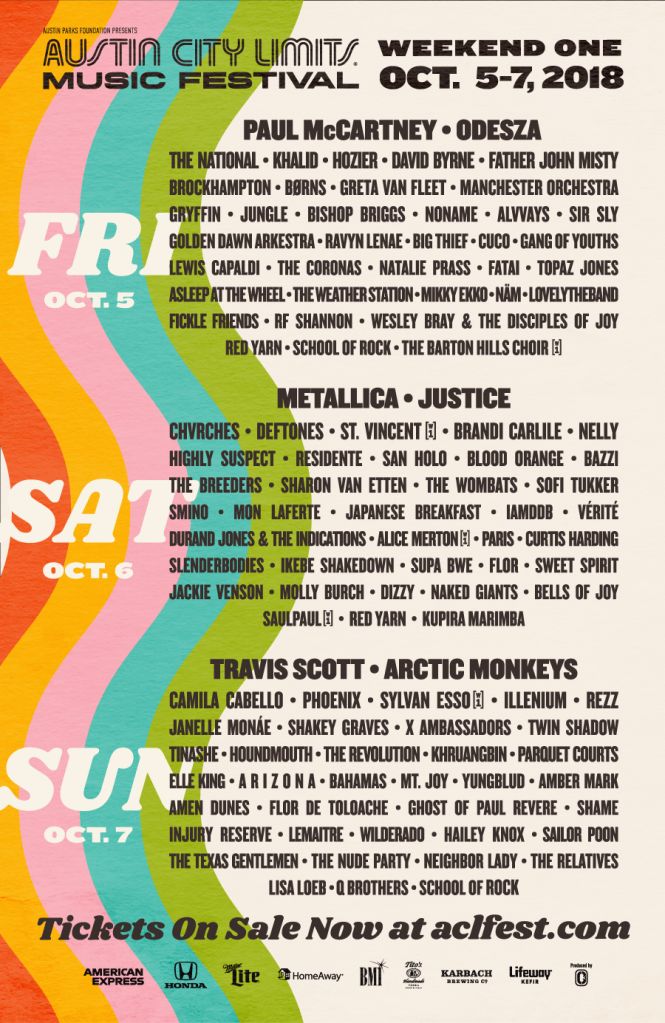 Though they share a name and city and little else these days, both the show and the festival are institutions. Austin City Limits is the longest-running music program in American history, the only television show ever awarded the Presidential Medal of the Arts, and a cultural touchstone that took outlaw country nationwide and shaped the production ethos of everything from MTV Unplugged to the musical performances on Saturday Night Live. Meanwhile, ACL is one of America’s mega-festivals, one that rivals New York’s Governors Ball, Chicago’s Lollapalooza, or Southern California’s Coachella for primacy atop the year’s festival calendars. This year, that means an appearance by the legendary Paul McCartney, who ACL booker Amy Corbin called “the biggest act we’ve ever booked.”

In a changing city, it’s nice to find a little predictability. However, as we approach one of the most significant weeks in a city already known for its musical significance (we see you, SXSW), it’s worth taking a moment to track what has changed and hasn’t about the world of Austin City Limits and how the show and the festival have spurred on each other’s evolutions over the course of the last two decades.

The Rise of Austin City Limits (The Show)

Let’s start in 1974. Because there’s nothing new under the sun, it comes as little surprise that the hype surrounding Austin isn’t even close to a recent phenomenon; things were already buzzing when a writer for Time noted, in a September article entitled “Groover’s Paradise”, that “rock is no longer a dirty word in Austin,” before going on to say that “within the past two years, following the lead of such veterans as Waylon Jennings, Willie Nelson and Jerry Jeff Walker, more than 200 musicians, vocalists and songwriters have moved to the Texas capital.”

Attracted by then-new clubs like the Armadillo World Headquarters, these musicians infused country music with a rebellious, frill-free raucousness. “If the Austin sound has a common trait,” Time concluded, “it is the lack, onstage, of show business antics or, in the recording studio, of slick electronic techniques. Leading musicians concertize and make records the way they drink — quickly, while everybody is looking, with few rehearsals and fewer regrets.”

This scene might’ve stayed relatively regional if not for the help of an unlikely country-rock patron: public television. At the same time that Austin’s music scene began earning national attention, the powers that be at the University of Texas-affiliated KLRN were seeking innovative, local ways to use the new studio complex that had recently been built (using state money) by the school’s communication department. Enter program director Bill Arhos, producer Paul Bosar, and director (and cosmic country scenester) Bruce Scafe, three KLRN employees who came up with a pretty good idea. In her book Austin City Limits: A History, author Tracey E.W. Laird credits the trio with landing on a formula, born half out of necessity and half out of opportunity, perfectly suited to the challenge at hand: a intimate live music program, stripped of the expected television glitz, that was both cheap to produce and indicative of the Austin scene’s own shaggy bonhomie, one that gave both the time and the space needed for genuine performances and featured performers drawn from the city’s deepening well of buzz-worthy local players, as well as regional, national, and international musicians drawn to the city’s burgeoning reputation.

If you watch the pilot for Austin City Limits today, you’ll be struck by a few things. You’ll probably think, “Woah, Willie Nelson looks so young!” and then simultaneously remember what a killer song “Bloody Mary Morning” is. You’ll also spot some excellent ’70s fashion statements within the in-the-round crowd. Mostly, though, you’ll be struck by the sense of continuity that runs from Nelson’s performance then to the new ones that appear on PBS stations every fall and winter. There are a few noticeable differences now, sure; the famous Austin skyline backdrop isn’t in place yet, the lighting’s a little more complicated (though not by modern standards), and the audience is still crowded into the old Studio 6A at UT-Austin rather than the purpose-built theater that it now inhabits downtown.

Otherwise, it’s remarkably easy to see the same unguarded ease of performance you’d find in, say, a Whiskeytown appearance from 1998 or the same ripples of audience excitement running through Kendrick Lamar’s 2016 set. In other words, it’s easy to see what executive producer Terry Lickona described in a 25th anniversary retrospective interview with the Christian Science Monitor in 1999: “We’re public television … and except for pledge drives, it’s not interrupted. So, it’s really, as Alan Jackson put it, the closest you can get to the experience of watching a full-length concert, even if it is edited down to half an hour or an hour.”

Maybe those through lines shouldn’t come as a surprise. Austin City Limits has become a home for many of its principal creators; Lickona has been with the show since 1979 and director Gary Menotti since 1983. Over the course of those years, they’ve helped the show navigate the challenges that come with longevity: the funding challenges associated with public broadcasting, the balancing act required to appeal to local and national viewers at the same time, the ebb and flow of Austin’s music scene that once led booking agent Mike Mordecai to tell the Austin American-Statesman in 1985 that “there’s not a band on Sixth Street that could have played here 10 years ago.”

By then, Austin City Limits had entered the form it would keep for most of the rest of the 20th century: after moving away from simply championing local bands, the show became what Laird describes as “less like a megaphone and more like a satellite,” an outpost where Austin up-and-comers mingled with regional and national stars of country, Americana, and roots music, as well as the occasional out-of-genre appearance from undeniable guests (from B.B. King and Ray Charles to Tom Waits).

Viewed from the outside, the success of Austin City Limits can seemingly be boiled down to steady leadership figuring out what can change and what can’t and then sticking to that. For ACL, the things that can’t change are, roughly, authenticity and intimacy. As long as the show continues to uphold its commitment to unfiltered, unpretentious performances that bring the energy of an Austin music venue to communities across America, then everything else (venues, featured genres, staging decisions) has room to adjust.

The Rise of Austin City Limits (The Festival)

The festival also earned high marks for authenticity. At the first few editions of ACL, it was always easy to tell you were in Austin. Those early lineups were anchored by multiple generations of the city’s performers, as well as other big-time acts in the Texas tradition; in those days, you could expect to catch a legacy act that could’ve appeared on Austin City Limits’ inaugural season (or, in the case of Asleep at the Wheel, did), country showmen in their prime (Lyle Lovett and His Large Band, Robert Earl Keen), or next-gen talents from the Lone Star State’s indie ranks (Spoon, The Black Angels, Old 97s, among many, many others). The festival knew its audience; as co-founder Jones put it on the eve of the inaugural fest, “certain acts are just not going to fly under [the Austin City Limits] banner.”

The early success of ACL set Attal and Jones on the path to becoming festival magnates (they would eventually help Perry Farrell resurrect Lollapalooza in Chicago in 2005) and helped Austin City Limits cement its name in the minds of a new generation. Tracey Laird traces the highest point of those early days to the festival’s fifth edition in 2006, where a headlining spot by Willie Nelson passed the torch and “a three-decades-wide musical circle closed.” During a triumphant headlining set, Nelson opened with the same song (“Whiskey River”) that night as he had 32 years prior on the pilot episode of Austin City Limits in 1974. It was a moment that gave the festival, and the show, symbolic license to continue evolving while still keeping its twin commitments to authenticity and intimacy.

Since then, there have been other, less symbolic changes; in 2012, the festival joined Coachella in expanding to two weekends, and in 2014, its parent company, C3 Presents, sold a controlling interest to corporate concert behemoth LiveNation. The 2006 edition of the festival was also the last to boast a lineup featuring Texas artists in a third or more of the slots; after hitting 36% that year, the fest’s local content dwindled, dropping into the low teens by the beginning of the ’10s.

Taken together, you might expect those factors to irrevocably alter the festival’s makeup, but it hasn’t totally played out like that. Despite growing to encompass three times the days of the inaugural fest, ACL has never outgrown the civic intimacy of Zilker Park. While the “rave DJ or gangsta rapper” feared by the Austin American-Statesman in 2002 eventually came in one form or another (starting with Bassnectar in 2009 and advancing more aggressively with the arrival of EDM in 2011), the weight of the Austin City Limits legacy also prevented the festival from ever straying too far from its roots in the local music scene. This stubborn connection also had the effect of preserving ACL’s identity at a time when other big festivals like Bonnaroo and Lollapalooza are struggling to settle on a satisfying redefinition.

Even this year, when the festival’s top line might leave it resembling nothing more than Lolla South, the underlying numbers are good; by my rough math, 21% of the performers at ACL have musical roots in Texas. By comparison, this year’s Lollapalooza sourced only 7% of its artists from Illinois. It’s not what it was in 2002, but it’s also not bad.

You can also trace a line from the festival’s broadening interests to the latter-day diversity of the television series. After more than a quarter-century of focus on a narrow but deep pool of sounds, Austin City Limits’ booking philosophy has grown to mirror that of the festival it inspired; in the early-to-mid-aughts, that meant a shift away from established country songwriters and towards indie rockers from Rilo Kiley to the reunited Pixies, while later, it foretold an eclecticism that widened to include everyone from LCD Soundsystem to Sam Smith to the aforementioned Kendrick Lamar. In addition to befitting the show’s natural evolution from local upstart to internationally respected tastemaker, this diversity also benefits the artists involved, giving them a rare opportunity to stretch their legs in a smaller room where the focus is more on craft than it is on spectacle.

Those are big changes. Big, but not foundational, not threatening to the hard work that’s come before. There will be more to come. Austin will continue to warp. The city that welcomes music fans this weekend will not be the same one that does so next year or the year after that. However, amidst all that upheaval, there’s a good chance you’ll be able to count on this: for a little while every October, whether in Zilker Park or in front of a television screen, you’ll catch a whiff of the weirdo Austin tradition kicked off by that Willie Nelson concert all those years ago and the unspooling strains of music that followed on after. There’s a good chance you’ll be able to count on Austin City Limits and the shared belief that sometimes, even if it’s only for an hour or so, music’s the only kind of anchor that anybody needs.