(He’s also the son of Kurt Russell and Goldie Hawn.)

However, if you do watch Lodge 49, you love him. As Long Beach surfer Dud, Russell brings an uncanny optimism to a show that often feels like having brunch on a Tuesday morning. It’s balmy, it’s strikingly palpable, and Russell is oft the source of sunlight.

That’s why Consequence of Sound‘s Editor-in-Chief Michael Roffman was so stoked to talk to the guy ahead of the show’s second season. Together, the two discussed the timeless nature of the series and the struggle of conjuring Dud’s unique aura. 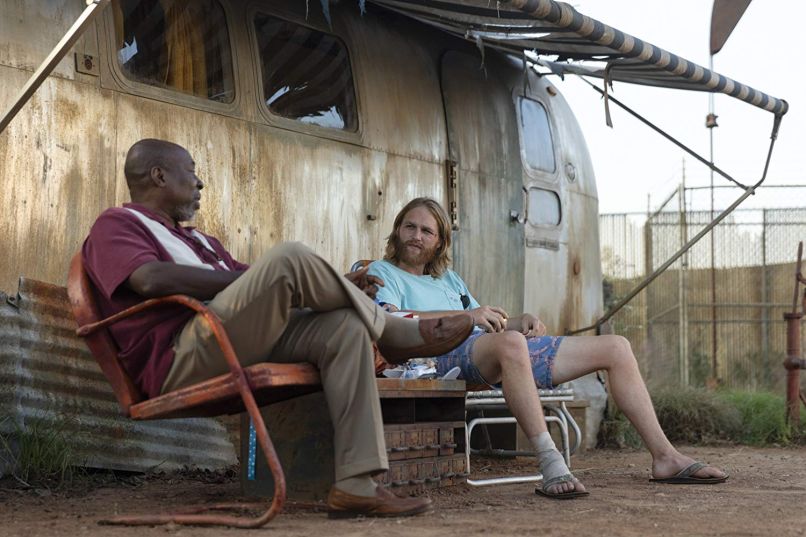 Speaking of hell, you tend to go there on screen, particularly in last year’s Overlord. In that film, you basically played the opposite of Dud: a stoic badass. What personality do you ultimately prefer playing and is horror a genre you’re interested in moving forward?

Yeah, so it’s funny, because the character I played, Ford, was two or three weeks before shooting the first season of Lodge. So, they really had to remind me like, “When you’re in a situation Dud doesn’t like, it’s not like you’re going to kill the guy. You’re not that angry, you have to keep that optimism.” And I’d be like, “Fuck, yeah, that’s right.” I’d just been so used to doing [anger] in a certain way that it would bleed over. But they were really good at being like, “Okay, that was great, but remember: happy!”

In terms of genre and what I like doing, there’s a couple aspects. One is that we’re in this interesting cycle where there has to be a marriage between the business of it and the creative of it, and I think — it’s been this way for a long time, but — a lot of the best directors will start off doing genre stuff because you can use a lot of allegories. You’re telling this big tale — it’s a tale, it’s a movie, we’re making movies — and I love that about genre.