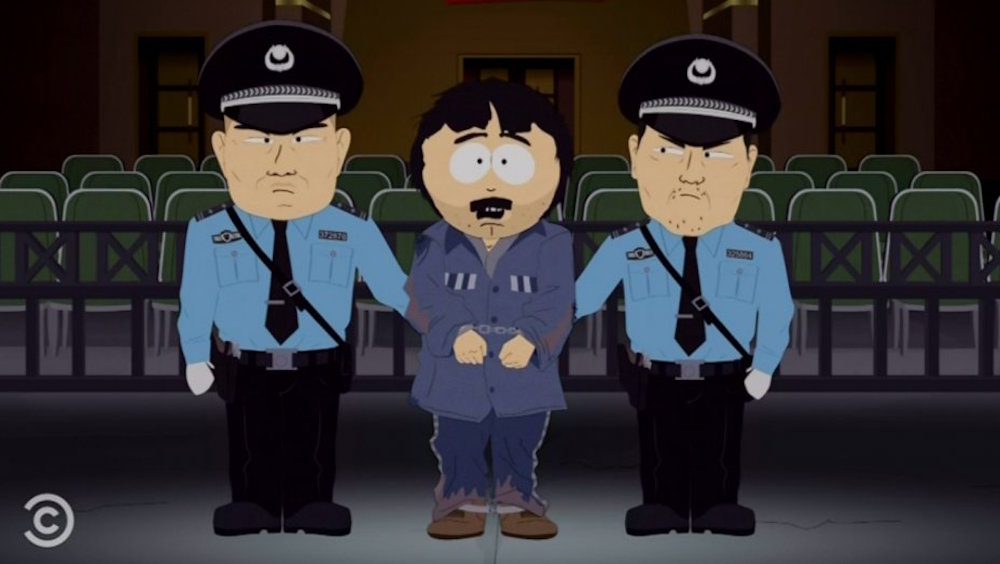 South Park is now banned in China after airing an episode called “Band in China”. The episode mocked Hollywood for alternating film and TV to better please the Chinese government. Beijing responded by scrubbing the show from the Internet.

In “Band in China”, co-creators Trey Parker and Matt Stone intentionally take aim at Hollywood’s editorial tweaking to avoid Chinese government censors, all while seemingly knowing their Comedy Central show would take a hit as a result, hence the episode’s name. They were right. Virtually “every clip, episode, and online discussion” of the TV show has been wiped from Chinese streaming services, discussion platforms, and social media, notes The Hollywood Reporter. For example, when fans type in the URL for the former South Park thread on Baidu’s Tieba, China’s largest online discussion platform, a message pops up that reads, “According to the relevant law and regulation, this section is temporarily not open.”

(Read: Ranking Every South Park Song from Worst to Best)

“Band in China” features two different plots, both of which criticized China. The first follows Randy as he tries to sell weed in China, gets caught, and is sent to a work camp akin to the ones Beijing uses to hold Chinese Muslims for political indoctrination. Randy even bumps into Winnie the Pooh — the beloved chubby bear that China infamously censors because Internet users often compare him to Chinese president Xi Jinping. The other storyline sees Stan, Jimmy, Kenny, and Butters form an extreme metal band that quickly gains enough attention to warrant a manager. When the manager tries to create a film about the band, he must continually alter the script in order for the film to be distributed in China.

South Park was recently renewed for another three seasons on through 2022. It looks like fans in China may not get to watch those episodes, or at least not the rest of season 23, thanks to “Band in China”. Whether it was a self-fulfilling prophecy or an intended goal, South Park pulled off the titular suggestion pretty swiftly. Maybe they deserve some props, though, as it’s an ethical stand of sorts. As they put it in the episode, “You gotta lower your ideals of freedom if you wanna suck on the warm teat of China.”

Update: In a tweet, Parker and Stone acknowledged China’s ban of South Park while also dunking on the NBA over its own ongoing controversy involving the country.

You gotta lower your ideals of freedom if you wanna suck on the warm teat of China. #southpark23