The Simpsons has aired its fair share of memorable musical moments since premiering more than two decades ago. The TV show’s 31st season will be no different; the animated sitcom is reportedly recreating Queen’s iconic 1985 Live Aid performance.

Queen guitarist Brian May posted the news on social media along with the above still, which shows Homer Simpson portraying Freddie Mercury, complete with white top, mustache, and blue jeans. “Aaay-O ! Doh ! Is this a ‘thing’ ? Apparently SO ! But I may have to wait a while,” wrote May. He said the Live Aid episode was due to broadcast Sunday, October 6th, citing a Blabbermouth article published last week.

However, yesterday’s aired episode, “Go Big or Go Homer”, seemed to come and go without the highly anticipated Queen scene. “I wanted to see Simpson’s Live Aid y’all!! We we bamboozled,” one disappointed fan claimed on Twitter last night.

(Read: The Top 10 Songs from The Simpsons)

A list of upcoming Simpsons episodes doesn’t make any mention of the Live Aid sketch, but it’s possible it could still pop up in a later season 31 episode.

Queen’s Live Aid concert at Wembley Stadium is widely regarded as the band’s most legendary performance. The 22-minute set, featuring “We are the Champions”, “Hammer to Fall”, and more, was recreated shot-for-shot in Bryan Singer’s 2018 biopic Bohemian Rhapsody.

While we wait for more news on The Simpsons’ animated retelling, revisit Queen’s original set below. 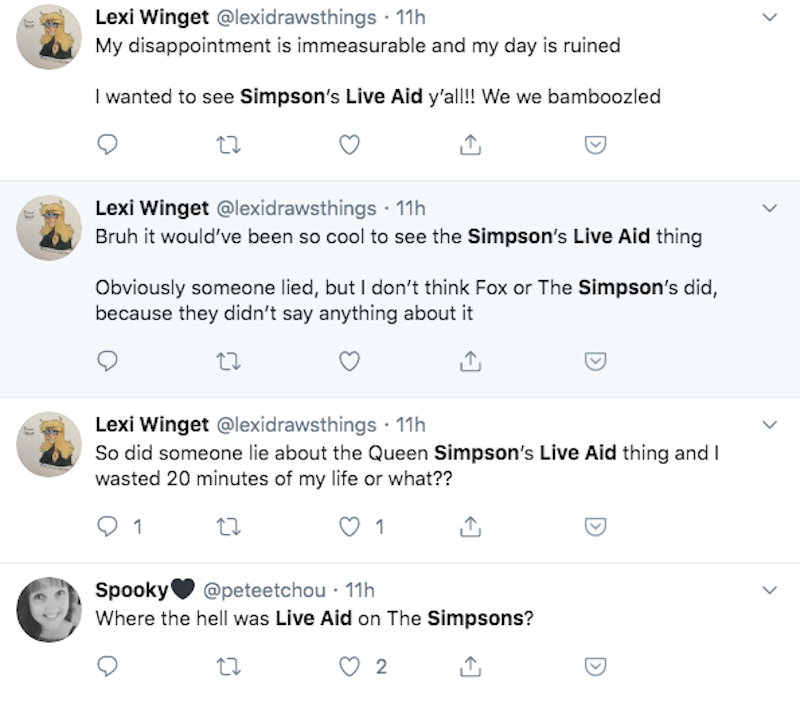